We recently announced the re-engineering of the NAG Library to bring extensive benefits to Python developers. The latest NAG Library for Python release brings new algorithmic content in the area of mathematical optimization. All NAG Library content works seamlessly with NumPy data types.

The 64-bit NAG Library for Python is available for Linux, Apple Mac OS, and Microsoft Windows, and is compatible with Python 2.7, 3.5, and 3.6.

Full product trials are available for the NAG Library for Python. For more information visit www.nag.com/content/nag-library-python.

Read 'The Making of the New NAG Library for Python, with Usage Tutorials'. 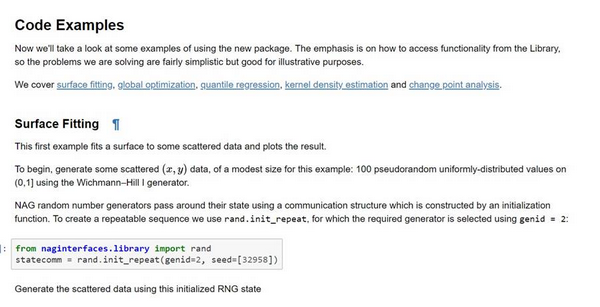 A new Technical Poster 'CVA at Scale with Adjoint Sensitivities' was showcased at the WBS 14th Quantitative Finance Conference in Nice last week. Alongside this work, for the first time, NAG have introduced a set of Algorithmic Differentiation (AD) enabled algorithms within their flagship NAG Library and announced further updates to dco/c++ - AD software tool for computing sensitivities of C++ codes.

The technical poster tackles the performance challenge in calculating XVA and presents a software-based solution using AD-enabled (adjoint and tangent) versions of NAG Library algorithms, dco/c++, and Origami (a light-weight task execution framework for grid and cloud). This solution offers users a way to manage the CVA at scale challenge in a cohesive and cost-effective way.

Launched at the WBS Quant Finance Conference, the NAG AD Library provides expertly developed, tested, documented, and supported numerical and statistical routines that make the Algorithmic Differentiation process quicker, more efficient and productive, and eliminate the need to write your own code or rely on unsupported code. The Library has been designed so that it can be used with or without any Algorithmic Differentiation (AD) tool; however, the conversion from code containing calls to primal routines to an adjoint version becomes most seamless when combined with NAG's AD tool, dco/c++. 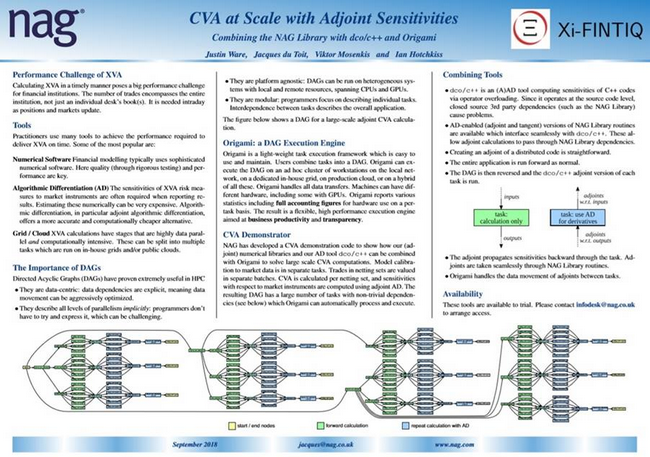 Some time ago NAG set out its commitment to encouraging girls into STEM subjects with the aim of tackling the imbalance of women in HPC (and tech in general) - more info. We've led and participated in various outreach activities since then - some of them with the Women in HPC group - some with the STEM Ambassador program to which a few NAG colleagues belong.

So, when WHPC launched their Chapter & Affiliates program earlier this year we felt the fit was right for NAG to join and cement our longstanding commitment to this important initiative. We are delighted to have been accepted as the first commercial organisation WHPC Chapter recently. You can read more about being a WHPC Chapter here.

Planning is underway for NAG's attendance at SC18 in Denver where WHPC will be active - as an aside, it is NAG's 30th year at SC - we have been present at every single event since its inception! We will be happy to chat about how, as an organisation heavily involved in HPC, we are making steps to ensure equality and increased diversity and will be publishing our updated diversity figures.

Technical Poster: CVA at Scale with Adjoint Sensitivities - Combining the NAG Library with dco/c++ and Origami

Calculating XVA in a timely manner poses a big performance challenge for financial institutions. The number of trades encompasses the entire institution, not just an individual desk's book(s). It is needed intraday as positions and markets update. The poster offers users a way to manage the CVA at scale challenge in a cohesive and cost-effective way.

Out & About with NAG