The University of Bath Honorary Degree

Dr Brian Ford OBE, Founder Director of NAG, received the honorary degree of Doctor of Science from The University of Bath

Dr Brian Ford OBE, Founder Director of NAG, received the honorary degree of Doctor of Science from The University of Bath in recognition of his contributions to the computing industry, international standards and university-industry collaborations.

The ceremony took place on 6th December 2005 in Bath's historic Assembly Rooms. Brian received his award from the Chancellor of the University of Bath, Lord Tugendhat. His orator was Professor James Davenport of the Department of Computer Science. [Orator's speech]

Brian founded the Numerical Algorithms Group (NAG), originally known as the Nottingham Algorithms Group, in 1970. Based on principles of quality and collaboration, NAG developed under Brian's leadership into a highly respected software development organisation and a unique international network of leading mathematicians and statisticians. In the 1970s, the group broke new technological ground in developing high quality, portable numerical software, and the NAG Library family of products has gone from strength to strength since those pioneering days. Over the years, there have also been a number of other notable product additions and technological developments such as the world's first Fortran 90 compiler and the emergence of the NAG Library Engine. Throughout its history and in keeping with its ethos, NAG has made outstanding contributions to international standards for technical software. With outstanding energy, vision and breadth of interest, Brian led NAG as its Director over three successful decades until his retirement in August 2004.

The Council of NAG Ltd, NAG staff, and all Brian's friends, colleagues, and collaborators in the wider NAG community, are delighted to congratulate him on his Doctorate of Science.

Response by Dr Brian Ford, OBE, upon the Award of the Honorary Degree of Doctor of Science by the University of Bath on 6 December 2005

Chancellor, you and your university do me and the Numerical Algorithms Group profound honour with the award of this degree.

The idea to build a numerical algorithms library collaboratively from within university resources came to me in February 1970. It would meet the immediate needs of Nottingham, Oxford, Leeds, Manchester and Birmingham Universities, and SRC Research Centre at Chilton. And in the event much else besides. Virtually from the outset we received practical support in the form of numerical algorithms and software from the numerical analysis community worldwide. Our mentor was Jim Wilkinson, the assistant to Alan Turing in building the Pilot Ace computer. Jim always supported and helped the young, when they showed promise. And I was young once. He gave us his invaluable numerical linear algebra software, and his contacts. Our key ideals were voluntary collaboration and quality in every phase of the activity.

To build the library, we needed the best algorithms in the various subfields of thirty areas of numerical mathematics and statistics - expressed in high quality software, conforming to computer language standards; supported by carefully prepared user documentation; with each algorithm selected on the basis of performance in solving test suites. For each phase of the activity, we needed standards. Wherever possible, these were computer-based. This led to our involvement in language standards, arithmetic standards, portability standards. It's wonderful being new in a field such as scientific computing - it gives you so much freedom. We also worked well together and worked extremely hard.

I had involvement in creating our world body IFIP Working Group 2.5 in numerical software and furthered international collaboration and wealth creation through some 26 European Union ESPRIT projects. We have particular skill in numerical algorithm development and many aspects of scientific computing. We seek to be the best in the world. We have also been glad to support and help other UK University initiatives and not-for-profit activities. NAG was one of the earliest software providers to agree a deal with CHEST founded here in the University.

This relationship enabled continuing use of our software by our founding interest group, UK Universities. It is good that EduServ continues to grow and prosper.

Being at the forefront of technical innovation has not been without its humour either. Workstation computers were invented by Digital; the DEC VAX11/780. I called it the "Implementors Dream". Soon a multi-million advertising campaign was in place and I was guest speaker at their user conference at the down-town Hilton in San Francisco. After the talk, I entered a lift on the ground floor of the Hotel. The lift stops at the third-admin-floor and in gets Sammy Davis Junior, the famous entertainer. Member of the Rat Pack of Frank Sinatra. The door closes, and standing side by side, we ride to the Convention floor (the 6th). Four people get in. "Aren't you Brian Ford" says the person opposite Sammy Davis Junior. "Will you sign my programme?" We stop at the 14th floor, and they get out. "Ain't fame great!" says Sammy Davis as I get out at the 17th!

Algorithms are more pervasive in our lives now, than when NAG started. And their power can be amazing. The invention of survival analysis by Professor Sir David Cox and his students, vital for the calculation of drug dosage for health treatment, and radiation exposure for cancer treatments, has saved tens of thousands of lives. Our software has underpinned the work of at least 30 Nobel prize winners.

I hope all of you will have careers which allow you to enjoy your work, as mine has done. 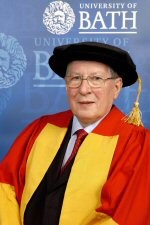