Instructions for Use of the NAG Library in a Cloudera Environment

This document describes how to use the NAG Library using the Spark programming model. The instructions given here are specific to the Cloudera™ environment and several test problems are also discussed.

For more information on using the NAG Library in Spark or any of the other topics touched upon in this article please contact us.

General Guidelines for Calling the NAG Library From Spark

The fundamental datatype used in Spark is the Resilient Distributed Dataset (RDD). An RDD acts as a pointer to your distributed data on the filesystem. This object has intuitive methods (count, sample, filter, map/reduce, etc.) and lazy evaluation that allow for fast and easy manipulation of distributed data.

Below is a simple Python example of using the NAG Library in Spark to calculate the cumulative Normal distribution function on a set of numbers (the message passing output from Spark has been omitted):

It should be noted that the vast majority of the algorithms employed in the NAG Library require all relevant data to be held in memory. This may seem to deviate from the Spark ecosystem, however when working with large datasets, two usage scenarios are commonly seen:

All tests were run using a cluster provided to NAG by Cloudera. The cluster is running in Cloudera's Mountain View data center on its own VPN. It consists of six HP DL380 gen9 servers and two HP DL360 gen9 servers. The worker nodes have 27TB of storage, 250GB of RAM, and 20 cores (40 with hyperthreading). Kerberos is enabled on the cluster using an Active Directory Server as the KDC. Centrify is also installed on the cluster for user synchronization.

The first three tests run using the NAG Library on the Cloudera cluster are examples of a logistic regression analysis given by the following equations. The log likelihood function for the logit function is given by, where  is the vector of independent variables,  are the dependent variables (’s or ’s) and  are the probabilities as fit by the linear function with weights, . The derivatives with respect to the weights are given by,

The first test solving a logistic regression of data was solved using the Apache Spark API and the NAG Library. The regression was solved by minimizing the sum of least squares of the log likelihood function for all data points in the data set. The NAG function for minimization used was e04uc (nag_opt_nlp) which is designed to minimize an arbitrary smooth function subject to constraints (which may include simple bounds on the variables, linear constraints and smooth nonlinear constraints) using a sequential quadratic programming (SQP) method. First derivatives can be supplied to this function to improve its convergence properties. The function e04uc may also be used for unconstrained, bound-constrained and linearly constrained optimization. The function e04uc uses forward communication for evaluating the objective function, the nonlinear constraint functions and any of their derivatives.

The data set used for the first test was very small and is data from Argentinian bank loan default records. Three independent variables are considered in the regression analysis and are person's age, balance of the loan and loan duration. The dependent variable is 1 if the loan is in default and 0 if the loan is not in default. A total of 45,211 records are in the data set. Both the Python and Java examples were run as described above.

The second test again solved a logistic regression problem as described above, but with a different data set. In this case, the data set came from the U.S. Department of Transportation, Bureau of Transportation Statistics. The data set consisted of on-time data for all U.S. flight records from 1987 to 2008. In this case, the dependent variable indicates if a flight was diverted (0 - no; 1 - yes) and the independent variables selected were carrier delay, weather delay, and security delay, where delay refers to the amount of time the flight was delayed due to the listed cause and are measured in minutes. Again, the regression analysis was run using the Java and Python codes.

The final test used the same logistic regression code as TEST 1 and TEST 2. This time a data set was constructed consisting of a dependent variable that is randomly chosen to be 0 or 1. Three independent variables were chosen for each dependent variable by randomly sampling a Normal distribution centered on a chosen logit function. This enabled the creation of a much larger data set than were used in TEST 1 and TEST 2. The test was used to obtain scaling results of the Java code running on the supplied cluster. The scaling results are shown in the figure below. Note that scaling is reasonable until the number of processing elements is equal to 40. For these cases the number of executor cores was varied up to 40 and simulation was run on one node. After that, executors were added and internode communication seems to become more of a factor. 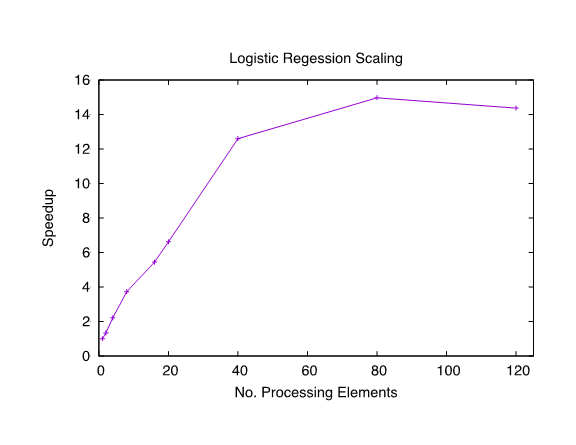 In this test we test the scalability and performance of using the NAG Library for Java to solve a large-scale multi-linear regression problem on Spark. The example data ranges from 2 GB up to 64 GB in the form of

We solve this problem using the Normal equations . This method allows us to map the sum-of-squares matrix computation across worker nodes. The reduce phase of Spark aggregates two of these matrices together. In the final step, a NAG linear regression routine is called on the master node to calculate the regression coefficients. All of this happens in one pass over the data – no iterative methods needed!

Example output from the linear regression is as follows:

Obtaining help with NAG and Cloudera:

All NAG documentation is accessible from https://www.nag.com/content/software-documentation.