A collaborative project between Cambridge Systems Associates Ltd and the Numerical Algorithms Group Ltd (NAG) was undertaken under the remit of the HPCFinance partnership.

The aim of the project was the development and testing of a Black-corrected version of a workhorse 3-factor Gaussian affine yield curve economic factor model (EFM, Dempster et al., 2010). In common with most alternative approaches in the recent literature to generating non-negative zero coupon bond yields using Black's (1995) idea, a simple approximation to the model was proposed. The approximation was based on the nonlinear unscented Kalman filter (UKF) of Julier and Uhlmann (1997). The performance of the approximation was investigated using an implementation of the UKF supplied by the Numerical Algorithms Group Ltd.

The resulting calibration code for this new model was found to require a compute time of approximately twice that of the basic EFM model - unlike all the alternatives published to date which are very heavily computationally intensive and require a significantly greater computation time. The UKF approximation is also amenable to being implemented in the cloud to reduce calibration times even further.

Initial empirical testing of the Black EFM model, using default parameter settings for the UKF, showed acceptable accuracy both in- and out-of-sample. The performance of the UKF model was further improved by calibrating the UKF to each dataset by adjusting the parameter alpha of the scaled unscented transform utilised by the UKF.

As can be seen from the table below, in each of the five major currency areas, EUR, CHF, GBP, USD and JPY, this re-calibrated model (denoted "Black EFM") matched or reduced mean square error of in-sample yield curve goodness-of-fit (in basis points) relative to that of the affine EFM model. Out-of-sample, it produced non-negative 30 year Monte Carlo scenarios for 10 year bonds.

Professor Juho Kanniainen, HPCFinance Leader and Professor at Tampere University of Technology in Finance said "The work produced by two HPCFinance partners, Cambridge Systems Associates and the Numerical Algorithms Group with research fellows Drs Igor Osmolovskiy and Philipp Ustinov, brings exciting new research and a practical model to the finance industry. The principal aim of HPCFinance is to bring together academic and private sector partners with the ultimate goal of improving computation in the finance industry to which the results of this project are testimony." 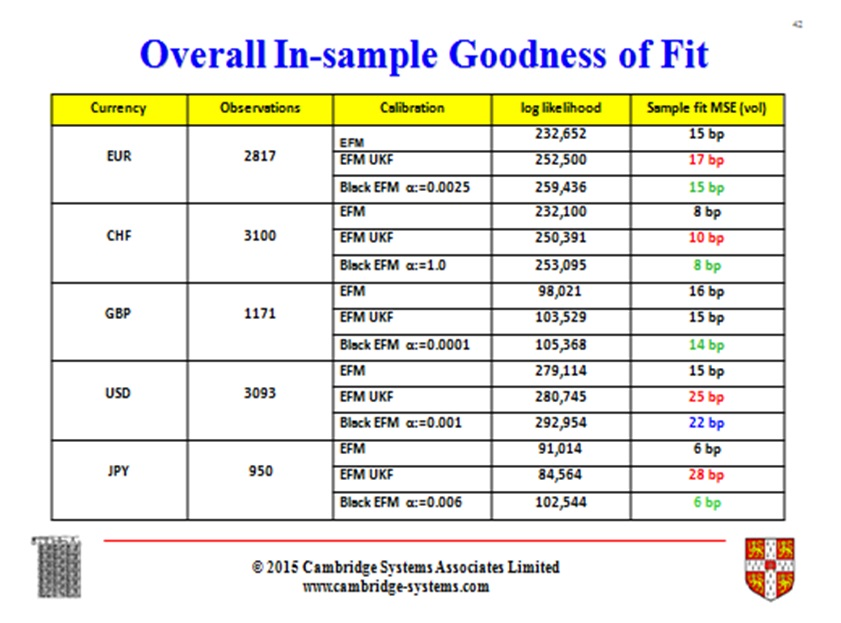 The HPCFinance network aims to proactively equip young people with the necessary skills to enable them to respond to future requirements and to provide solutions for the effective management of financial risks using HPC techniques. The objective of the network is to help improve the financial strength of banks, pension funds, insurance companies, other financial institutions and hence benefiting households throughout Europe. In achieving its goals, HPCFinance will provide the European finance community with new robust financial models and specialists, with state-of-the-art skills in computational finance. HPCFinance is a Marie Curie Initial Training Network, funded by the European Commission with the budget of 4,101,000 EUR within the 7th Framework Programme.